Well, last weekend sucked.  It wasn’t just having a couple blinders and missing on a few plays here or there, I had the game theory wrong on all four games and actually picked all four losing teams.  So I guess if you are bad you are bad.  No victory lapping an easy play like DK Metcalf or saying Dalvin Cook was the Viking to have when you have so many other misses required.  I like the Divisional round a lot more and feel more confident this week than I should after a bad first round of the playoffs.  This article will make you money.

Just one year ago Patrick Mahomes was quickly on his way into the HOF and here we are a year removed from his magical 50 touchdown season in his first full year as a starter and he’s just a guy because of the emergence of Lamar Jackson in this world of what have you done for me lately.  Mahomes regressed only in the context of statistics for projection purposes but not in his overall play and the Kansas City Chiefs over the last half of the season were quietly one of the best all around teams.  They draw a Houston opponent who beat them early in the regular season 31-24 and should present another tough spot but I trust the Chiefs not only to roll this weekend but win next week and be representing the AFC in Miami at the Super Bowl.

So how do they beat Houston?  Through Mahomes.  Plain and simple.   In their prior game Mahomes was only 19-35 and the Texans dominated with 35 first downs to Kansas City’s 20.  It’s a very basic statistic but if that stat is anywhere back to normal in this game then the Chiefs should absolutely roll because I don’t see Houston’s defense holding up long enough to stop them and if the Chiefs D continues to play as they have lately and get off the field on third down then we’re gonna see a ton of opportunities for Mahomes to shine.  Houston has no answer for Tyreek Hill and he scored twice in the regular season but look to take a gamble on one of the secondary players for the Chiefs because I suspect Mahomes accounts for 4+ touchdowns with a strong chance of going for 5+ and if that happens then Demarcus Robinson, Mecole Hardman or Sammy Watkins.  There’s no clear indication as to any one of these guys being the better play over another as all are seeing similar snap shares and relatively low target shares as agruably the #4 option in the passing game behind Kelce, Hill, RB — but for DFS this week adding one of them to your Chiefs stack will be the difference. 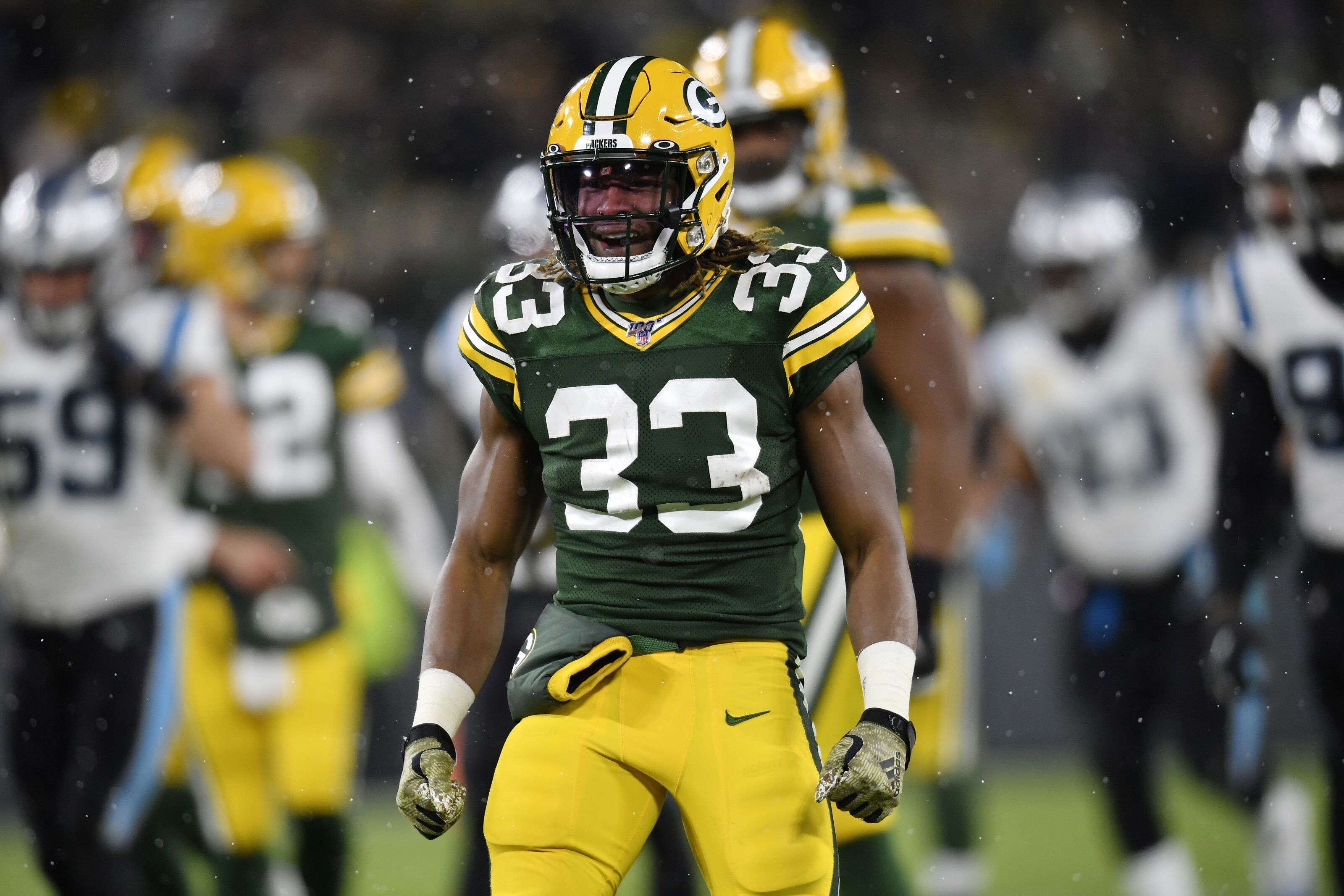 Playoff DFS is about one of two things.  You’re either telling your spouse who hates fantasy football to join up with you and play 300 lineups with you and then pretend it’s not collusion or you pick the right spots to fade.  For me I am going to be fading Aaron Rodgers and the Packers passing game and also Lamar Jackson for the Ravens.  The two best ways to capitalize on my fades will be to play guys like Aaron Jones and Mark Ingram as nice leverage spots.  The options at RB this week are a little thin in my liking.  Seattle has no consistent run game to trust and with Lynch taking the goal line work it really hurts Homer as a potential sneaky play.  Houston/Kansas City both have viable options but I’ll already be heavy on that game so I don’t need them as one off plays.  This basically leaves Derrick Henry who will gain ownership because he has been dominating of late and we know he will get the ball a ton.  But who are the potential Dalvin Cook type plays this weekend?  Gimme all the Aaron Jones and Mark Ingram as leverage spots off my fades of Packers passing game and Lamar Jackson/Ravens passing game.   With the news that Ingram is questionable still on a calf injury he’ll drop in ownership and is someone I won’t have 100% of across 5 lineups but Aaron Jones on the other hand will be 100% owned for me.

The second half of the season was not kind to the 49ers defense as they suffered some tough injuries and also had the effects of a tougher schedule and not being able to give new looks on defense to teams.  Slowly but surely their secondary started to give up big games to other teams #1 WR and Tight Ends and they started to yield more 20 point games with each of their last four opponents putting up 20 or more points on them.  But with a BYE week rest and a Vikings offense coming in off a big upset where their defense carried them I love San Francisco to get right on the defense side of the ball.  They’ll get to Cousins more than New Orleans did to generate sacks and the Vikings were just begging to fumble the ball away last week.  History has shown that these early Saturday Divisional playoff home teams tend to roll and the 49ers are the best bet this weekend to do that.  It won’t happen without their defense having a dominant day.

It’s only four games obviously so you’ll see lots of lineups that are heavy in one spot or another, but with teams coming off the BYE vs far lesser teams we have prime spots for the home teams to roll up some big wins and that means doing a stack across all positions.  I’m talking the ole QB-WR-TE-DEF stack. You know, that one that you have NEVER considered ever.  But tell me Lamar-Brown-Andrews-Ravens D doesn’t sound tempting, right?  This is my favorite build if doing multiple lineups this week (the stack type, not Lamar) and I see that being the must have winning formula this weekend.

The positional rankings are going to give you my top player at each position.   For those who like a ‘CORE’, this is your CORE.

Patrick Mahomes … He should be 50% owned but with Rodgers, Lamar, Watson, Wilson all gaining 10-15% each we’ll get a discount on Mahomes ownership.  No waffling here.  I will have zero lineups on the 4 game slate that do not have Patrick Mahomes at Quarterback and neither should you.

No other QB for me unless its part of a 4 man full team stack.

Aaron Jones … I think the Packers get by versus Seattle because the ‘Hawks really have been strung together as best they can and back to back road games in the playoffs is always a tough task.  I’m not hyping Jones because of weather but more because I don’t think the Packers passing game is elite and they should be able to win the line of scrimmage which will create the best path to scoring on the ground w/ Jones.

Derrick Henry … There’s no reason to spend up at WR on DraftKings this week, so they are just basically building you into playing D-Henry.   Not a must play for me necessarily but I am building towards a Jones-Henry-Ingram core backfield.

Travis Homer … Forgot him on the initial article.  He’s definitely one of my favorite RB spots and I would roll him over Williams, Hyde and Moestert.

Mark Ingram … Entirely a leverage spot off Lamar Jackson.  I wouldn’t project Ingram to do more than about 12-14 fantasy points but that should be good enough.

Duke Johnson … Enter a cheap pass catching RB on a spot where he should be involved in a high scoring game.   Lots will be on Hyde, I prefer the PPR boost that Duke gets.  Houston will be down in this game.

Tevin Coleman … Call me a sucker if you want, but one of the builds this week should be to roll STUD WR like Hill, Hopkins and Adams.  Nobody will have all three because of limited RB options but Tevin Coleman is too good to completely be ignored by the 49ers in the playoffs and is only $3500 on DK.

Tyreek Hill … The freak is going to break loose against Houston in what should be the best game of the four game weekend in my mind.

Tyler Lockett …Tyler Lockett is going to go for 7 and 100 yards this weekend after Metcalf went off last week.  You watch.  Ball will have to be out quick for Wilson this weekend against a good Packers pass D.   Lockett will catch and run a big one.  He has seen as many targets as Metcalf outside of the two games against the 49ers and in one of those he got injured + is $200 cheaper than Metcalf and will be about 10-15% lower owned than Metcalf.  This is as easy of a pivot as there is this weekend.

Nuk Hopkins … With Tyreek being #1, Nuk is #2 ‘STUD’ ahead of Davante Adams.  Much better game in my mind.

Stefon Diggs … With Thielen being banged up during practice Diggs might boost a little bit in ownership and it’s also the first game on the slate.  But the 49ers defense will be vulnerable through the air a little bit and he’s the main guy to get it done for the VIkings.

Deebo Samuel … Best young WR on the slate.  Yup.  I said it.  They have increasingly found ways to get Deebo involved and Xavier Rhodes and company won’t have the same luck they had last week when their DL stepped up in a big way.   $5200 on DraftKings is a good price.

Olabisi Johnson (MIN) … If Thielen does get limited he could see a couple more targets, but that aside he’s seen some increased usage w/ Treadwell out.

Irv Smith … Thielen banged up, Cousins likely not to drop back deep and San Francisco ranking as the second worst vs TE on this slate.  It all adds up to Irv Smith having a decent game and at a position where I am not rushing to pay up with Kelce or Andrews I’ll take any TE who is going to see that type of bump for only $2,600 on DK.

Jacob Hollister … TE is a dumpster this week and Hollister usually gets some red zone looks.

Mark Andrews … Titans are the weakest team playing vs TE and Andrews saw over 7 targets in 10 games this season.

Kansas City Chiefs … Play well at home usually on D and were good down the stretch.  Texans are the best sack team to target on this slate and Houston comes in one of the worst first quarter teams offensively in the NFL ranking in the bottom 10 in that category.  Chiefs Defense should play with a lead and increase their sack/turnover upside.

30 Jan 22 srenner
Welcome to the Conference Championship weekend where we have teams facing off that met fairly…
DA, NFL
0