During the draft season of every fantasy sport there is so much time and effort put into finding a sleeper and when to take a risk on that sleeper.  Fantasy Football is the king of this as there are articles and justifications given as to why players could be the next breakout superstar starting sooner than the coaches from the previous season have been fired and leading all the way up until Opening Kick Off of Week 1.  Yes, it’s the great quest for the holy grail and much like in Indiana Jones in the last crusade we must not choose poorly when looking for that late around sleeper.

I am going to explain the model that I have used to land late round superstars Alvin Kamara in 2017 and James Conner in 2018.  Not only did I land these players in the mid to late rounds in their respective years I decided to go all in with them in every draft possible.  In neither case however, was I drafting these players as hand-cuffs for the other players on their team.  No, this model that I have was not designed to be a hedge, this was designed to find that player who would provide me value that normally is only found from a top 2 round pick.

In 2017 with Alvin Kamara many people were drafting Mark Ingram or Adrian Peterson with the Saints I was waiting for Kamara and while in 2018 while there was much uncertainty around Le’Veon Bell I was patiently watching as others took the Bell bait and snagged up Conner in best-balls, regular seasonal drafts and best of all — Auction Leagues.  Needless to say both picks paid off tremendously and vaulted me into the playoffs in my leagues.

Many would point to these as calculated risks worth taking, but there was a defined process associated with both of these players that actually led me to them as early as MAY in each year and I have been on someone who fits a similar mold for the 2019 season and as we get closer and closer to the start of the season his stock continues to rise.

This is a model that applies to Running Backs only and it requires us to narrow down the field because otherwise we would be taking too much of a risk just blindly going in on one person without following this model.

Rule #1.  The player must be on a team that is consistently a top tier offense.

One of the mistakes that I feel is often made is chasing for a sleeper player on an offense that historically is not in the top 10 whether it be due to talent, system, coaching or even environment the team normally plays in.  Simply put we are looking for a player who is a sleeper that can potentially take over the lead role for a team and be very productive and players like this aren’t necessarily ELITE talents unless they are rookies like Kamara who are waiting to be major surprises, but even then you need someone who is going to benefit from playing in an offense with many weapons.  So you can immediately rule out teams like Miami, Washington, Jacksonville, Tennessee, Detroit, Denver, Seattle, Baltimore.  They’re just not fast paced enough and they just do not have enough overall offensive talent or proven scheme to put faith into them producing a sleeper.  There are more that I would put into this list and some of you may differ on opinions, but nobody should be debating if those teams are considered top 10 offenses.

Rule #2.  The team must have a PROVEN and DARN NEAR ELITE / HOF Quarterback

This is a big one and it coincides with #1 quite a bit.  In almost every scenario we are looking at a backup running back or someone who isn’t clearly defined as the lead dog in the backfield.  This means that he’s going to need the players in front of him to not come out and be elite themselves carrying the rock 20 times a game.  But we’re still needing a very good offense and thus if we don’t have an elite lead RB then we better have an elite level Quarterback.  In the examples of Kamara and Conner nobody would debate that Drew Brees and Ben Roethlisberger are proven and capable Quarterbacks at putting the team on their back.

Rule #3.  The player needs to be in the teams future plans

This is the secret sauce of the formula and how you can normally project where the potential sleeper is going to lie.  A player who is on the final year of his deal is not going to necessarily vault to the front of the teams focus to get them more involved, but a player who the team maybe has drafted or invested a roster spot into with the hopes of them one day taking over immediately becomes a player who can accelerate sooner than later.  After all, nobody questions if we are looking for talent, it’s more opportunity.  I heard time and time again as I went after Kamara that he was recommended as a “Dynasty Stash” player and I just mocked at that notion because I knew he would burst out in 2017 as he fit the offensive scheme very well (See Rule #4) and there was too much upside in him breaking out sooner than later to wait until it was a proven entity.  When Kamara started bursting out in 2017 there were a ton of naysayers who said he couldn’t sustain it.  Then in 2018 it was that he would regress and now he is a lock top 4 pick in every draft without even debate.  James Conner is going through a similar situation this year as he seems to be overlooked and considered an afterthought or a product simply of the system.  However, his role shouldn’t change this year and in his case he was always going to be the Steelers replacement for Le’Veon Bell, which is why they didn’t cave into Lev’Bell in negotations.  They had their next guy and Bell just simply gave them the chance to use him sooner.

Rule #4.  The system must fit for opportunity.

The system matters and I am a big believer that it matters for Running Backs.  Kamara had great pass catching skills, something the Saints valued and thus he would have a role if given the window.  Conner the same and although not the elite pass catcher that Bell was, Conner in many ways was viewed as someone that COULD be trusted to carry the bulk of the touches for Pittsburgh which is something they have been known to do with Running Backs.

and last but not least …

We need something disruptive to occur and we need there to be uncertainty in drafting around this team for us to be able to capitalize on the value of a sleeper.  With Kamara everyone was focused on Adrian Peterson signing with the Saints.  With Conner everyone was focused on when Bell would come back and if Jaylen Samuels was maybe the replacement option.  There needs to be a defined path for our sleeper as identified in Rule #4, but we also need some level of confusion and disruption in order for our player to remain under the radar but also be a viable sleeper.  In other words, we need the fire to produce smoke, but hopefully it clouds everything too much for anyone to find the holy grail.

So who checks all these boxes?  It’s not Tony Pollard and here is why.

Pollard is someone who actually I considered to fit this role but what is the difference between Ezekiel Elliott and Adrian Peterson and Le’Veon Bell?   The Cowboys aren’t getting rid of Zeke.  So not only do I anticipate Zeke coming back, they’re also not invested to find the replacement for Zeke.  Not to mention, Pollard isn’t that same type of back.  He was used a ton as a receiver at Memphis and although I do think he could be a decent hand-cuff, he isn’t going to finish in the top 10 among Running Backs.

No, friends.  Our sleeper this year is honestly someone I was on at the beginning of the season.  There is a Running Back who has proven to be a little inconsistent with his health but is going into the last year of his original contract and will likely want a lot of money on the open market — which is more than his team is willing to spend.  This is a situation where we saw this lead RB go down for a little time last year and we saw the replacement path clear as day as the team had another option to fill in for him.

So if you have been following along and doing the math in your head, then you know the team we are looking at is the L.A. Chargers and the sneaky running back? 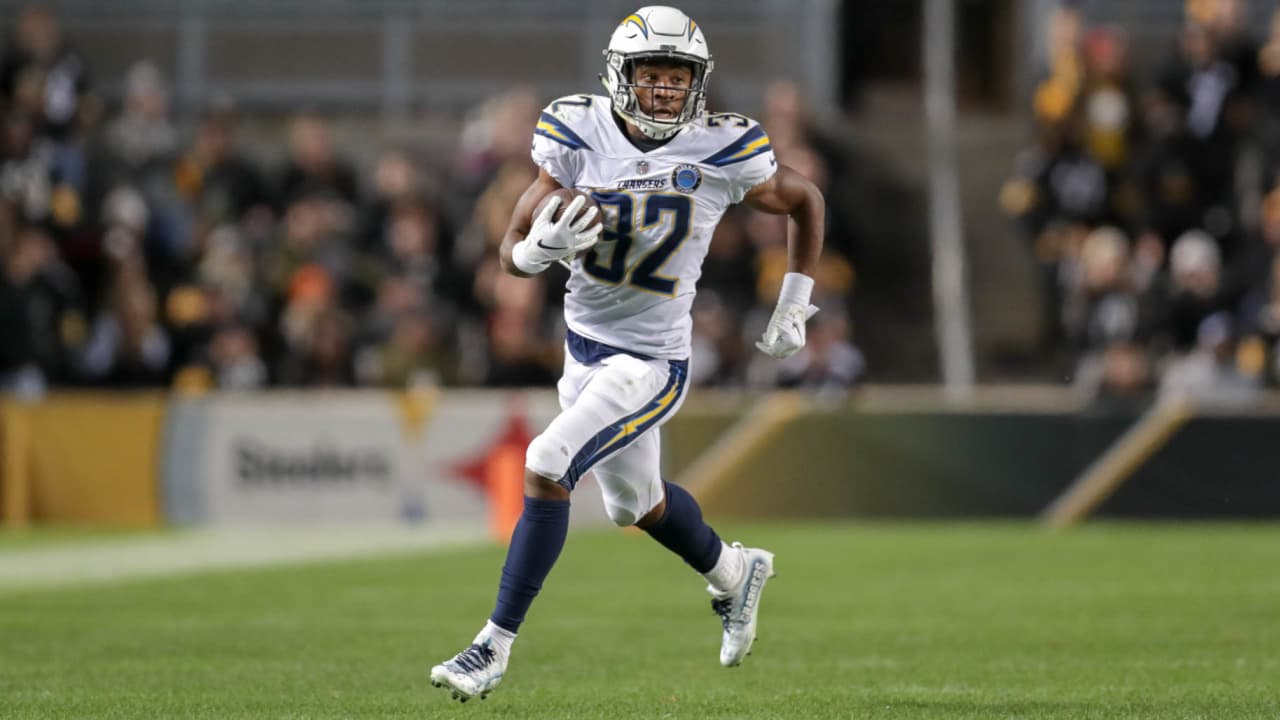 I am taking him everywhere and he is going AFTER Ekeler.  Let’s first recap the five rules and verify that he fits the critieria.

HOF QB:  Whether you like it or not, Philip Rivers is a future HOF Quarterback.  He has never missed a game with the Chargers and can keep his team in any game.

Future Plans:  Jackson was drafted last year by the Chargers and is in the second year of his rookie deal at the age of 24.  This is his year to prove his value for next season as well.

The system fits.  Austin Ekeler was already involved in the Chargers offense and remains their 2 minute drill back.  While he would expect some usage increase they aren’t going to overuse him just because Gordon is gone and when Gordon was out LATE last year we saw Jackson get an increased workload with big touch games against Pittsburgh (8 for 63), Cincinnati (7 for 12) and Kansas City — with no Ekeler as well (16 for 58).  There’s a path for him to have a role.

Disruption:  And now the obvious one.  The Melvin Gordon contract situation doesn’t look to be getting any better.

So draft Justin Jackson with confidence and make sure that going forward when you want to find a sleeper, you develop a model that is proven and can be trusted!